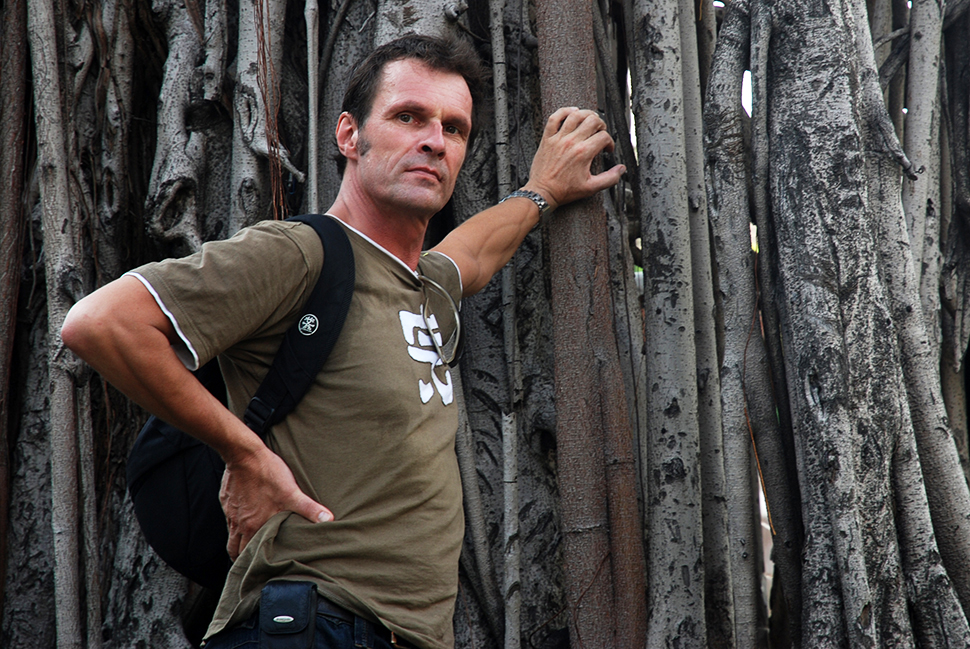 
Freek Drent (Enkhuizen, the Netherlands 1959) BA visual arts & design / mixed media 1990 at the Willem de Kooning Academy Rotterdam, the Netherlands. Freek Drent was one of the eight members of ExpoHenK artist run space and ExpoHenK artist collective in Rotterdam, the Netherlands from 1993 through 1997. Until 2008 Drent was involved in various cooperative projects with, among others, filmmaker Stella van Voorst van Beest and sculptor Ron van der Ende. Since 2008, following an artist-in-residency program in Beijing, China, he is living and working in Bình Chánh, Ho Chi Minh City – Vietnam.

The highly detailed collageworks I’ve been working on are based on a source of varied visual material that I’ve been collecting, editing and archiving over a longer period of time. This largely consists of clear-line drawings derived from manuals, technical or anatomical books. My choice for these visual elements is determined by a preference for unambiguous, stylized forms that usually involve a clearly recognizable association. I consider this basic "construction material" that I use to work with. With  stacks and arrangements of these individual elements, I composed more and more extensively detailed still lifes. They then were applied and positioned layer upon layer. Brought together in a new context they have lead to new alienating and elaborate compositions. In my recent work I partially follow this procedure but experiment with different multimedia techniques, manual cutting and pasting.

The series of digital collages [2004/2014] derive from different sorts of illustrations and were taken from a variety of sources. These include manuals of domestic devices; books on anatomy; repair manuals and craft books; and, for instance, the IKEA catalogue. They further range from 16th-century etchings; Andreas Vesalius’ atlas of the human body; to 20th-century ‘exploded views’ in, for example, the handbook of the motor mechanic or of the evolution of humankind. During this period Freek Drent built up an extensive archive of these types of information sources. Selections from this material, especially the many different (black and white) ‘clear-line’ drawings, formed the starting point of the collage-works. They underwent significant changes and were arranged in complete new settings; resulting in extremely detailed digital works.

"Freek (which we learned is short for Frederick) is an artist from the Netherlands who studied at the Willem de Kooning Academy in Rotterdam. He paints what he calls collages, which are really depictions of huge piles of stuff, mostly repetitious imagery of trailers, legos, skulls, cars, and tiny machine whozits heaped into odd mountains. The colors and objects he uses make his paintings form something between a subdued Murakami and that giant pile of trash from the movie Labyrinth, and are derived from technical drawings, books, and etchings from various time periods. Drent's work swims with all the forgotten washers and gears that are the very underpinnings of our world, but that we don't think about even once in our lives. It's a common juxtaposition to take the things that we deem so unimportant and make them beautiful, but Drent has found a very unique way of doing it. Plan on spending plenty of time at www.freekdrent.nl, trying to identify all the bits and bobs in each collage."

Dutch artist Freek Drent (featured in Hi-Fructose Collected 2) creates labyrinthine collages where objects out of the artist’s imagination collide in what appear to be free-floating structures in space. The artist developed this style over the course of his extensive travels and studies in the United States, Southern Europe and Iceland, and now he calls Ho Chi Minh City, Vietnam his home. He hasn’t cured himself of the travel bug, however, and still makes his way around Southeast Asia, creating artworks that meditate on the ever-changing urban landscape. This year, Drent has created several impressive new works that abound with detail. Take a look at some images of his latest collages, images courtesy of Freek Drent.

This year, Drent has created several impressive new works that abound with detail. Take a look at some images of his latest collages, images courtesy of Freek Drent.

Freek Drent creates meticulous and highly detailed digital collages; composed with picture material originating from among other things, technical and anatomical handbooks, repairing handbooks, ikea furniture or instructions for use of domestic equipment. Vast collages are created from these individual components, which are grouped in `still life composites’.

Drent’s work draws on the historic Dutch tradition of Still Life (dating back to the artistic climate of the Netherlands in the 17th century). Continuing this tradition of detailed realism and hidden symbols, his work also carries the moralistic vanitas message of his Dutch predecessors, alongside referencing architecture, impermanence and urbanisation.

In addition to the collages, Drent produces film works that reflect contemporary social shifts: sometimes it is documentary in nature, sometimes a poetic transformation of reality, usually a combination of both. Urbanisation and increasing traffic suggest a purposeful movement here: beyond the past, towards the future. Most recently Drent undertook a three-month residency in Shanghai, China, and showed work (in collaboration with Stella van Voorst van Beest in Archepology at Bureau. Bureau Gallery, Manchester. www.bureaugallery.com

Dutch artist and photographer Freek Drent first came to Asia in 2006 to research and collect images and photographs to complete a series of collages he was working on during that period. Later he participated in an artist-residency program offered by Vis-a Vis Art-Lab in Beijing.
Inspired by the east-asian culture and the explosive and dynamic changes of their societies, he returned several times in the following years, traveling China and Vietnam until he decided to settle in Saigon. Freek Drent focuses closely on daily life- or street-scenes and objects, intensively exploring various hidden urban districts and capturing aspects of the rapidly changing life of Saigon – Ho Chi Minh City.